Hot dip galvanizing protects steel from corrosion by providing a thick, tough, metallurgically bonded zinc envelope, which completely covers the steel surface and seals it from the corrosive action of its environment.

The durability of hot dip galvanized steel is particularly important in Australia and New Zealand where 85% of the population live within 50 kilometres of the coast. Corrosion rates for structural steel in these coastal regions vary from 1µm to 1mm per year, while the hot dip galvanized coating can protect structural steel by providing barrier and cathodic protection for over 50 years close to calm seas and over 30 years when the steel is at least 200m from surf beaches. Inland, examples of the original hot dip galvanized overland telegraph poles installed in the 1870’s to counter the termites can still be found with their original coating intact and protecting the steel.

The galvanizing process produces a durable, abrasion-resistant coating of metallic zinc and zinc-iron alloy layers bonded metallurgically to the steel base and completely covering the work piece.

No other coating for steel matches galvanizing’s unique combination of properties and advantages:

The nature of corrosion

The corrosion of a metal is a physiochemical interaction between a metal and its environment which results in changes in the properties of the metal. Corrosion of metal results in the degradation of the metal to an oxidized form, for example the conversion of metallic iron to rust. For corrosion to occur it is necessary that the metal is in contact with an electrolyte, typically surface moisture including condensation or rain and ponding water. The electrolyte facilitates the flow of charge and matter and enables the electrochemical reaction to proceed. It is a key requirement for metal corrosion. These electrolytes serve to allow formation of small electrolytic cells on the metal surface, which then results in corrosion.

Another factor influencing the corrosion of a metal is the difference in electric potential on the surface of the metal, which can be caused by variations in composition, the presence of impurities, uneven internal stresses, or a non-uniform environment.

The corrosion of steel is described in more detail in the following graphics.

Differences in electrical potential on the steel surface are caused by non-uniformity of the surface composition, by surface moisture or by the electrolyte in which it is immersed. Small electrolytic cells are formed comprising anodes and cathodes. 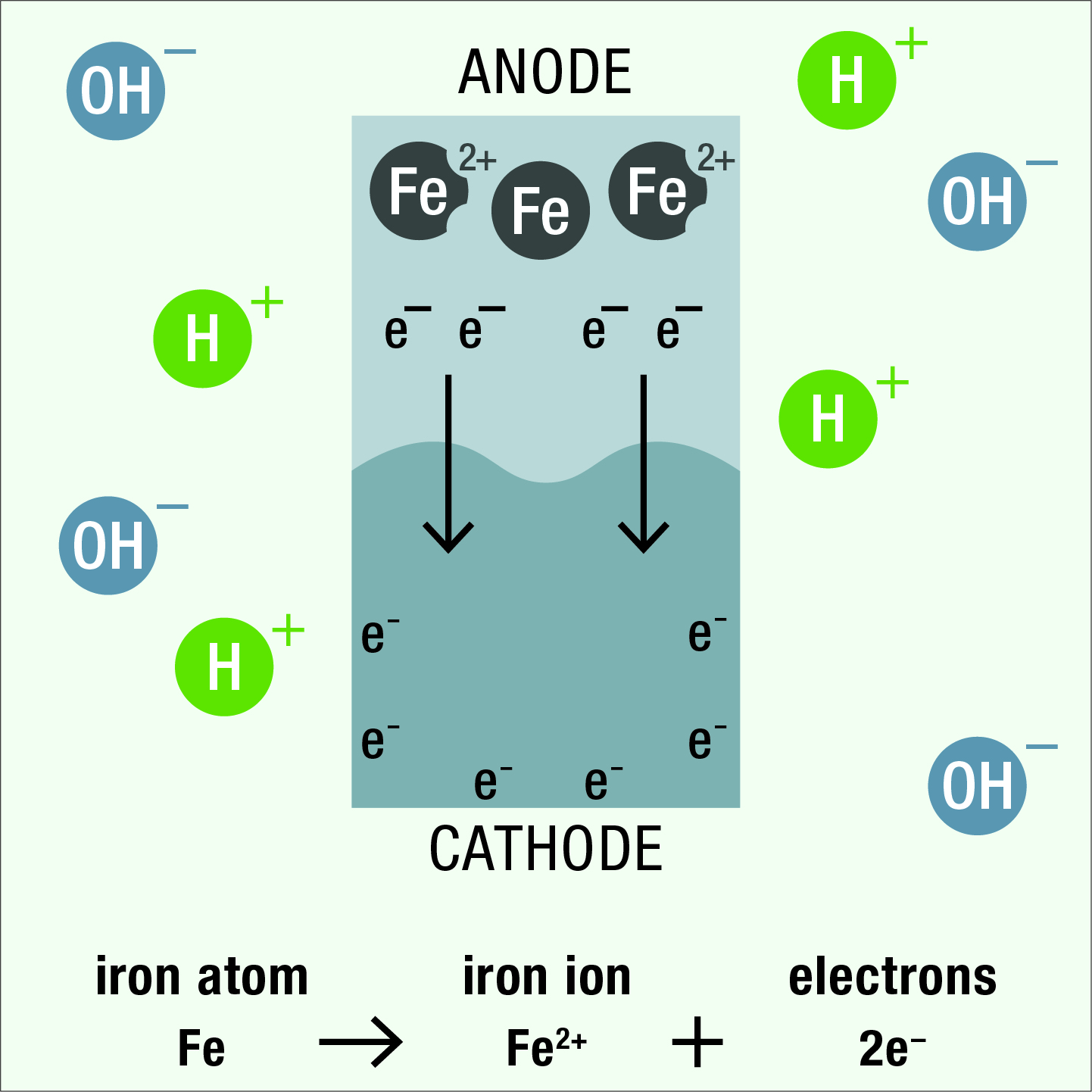 As the result of differences in electrical potential within the cell, negatively charged electrons flow from the anode to the cathode and iron atoms in the anode area are converted to positively charged ions. 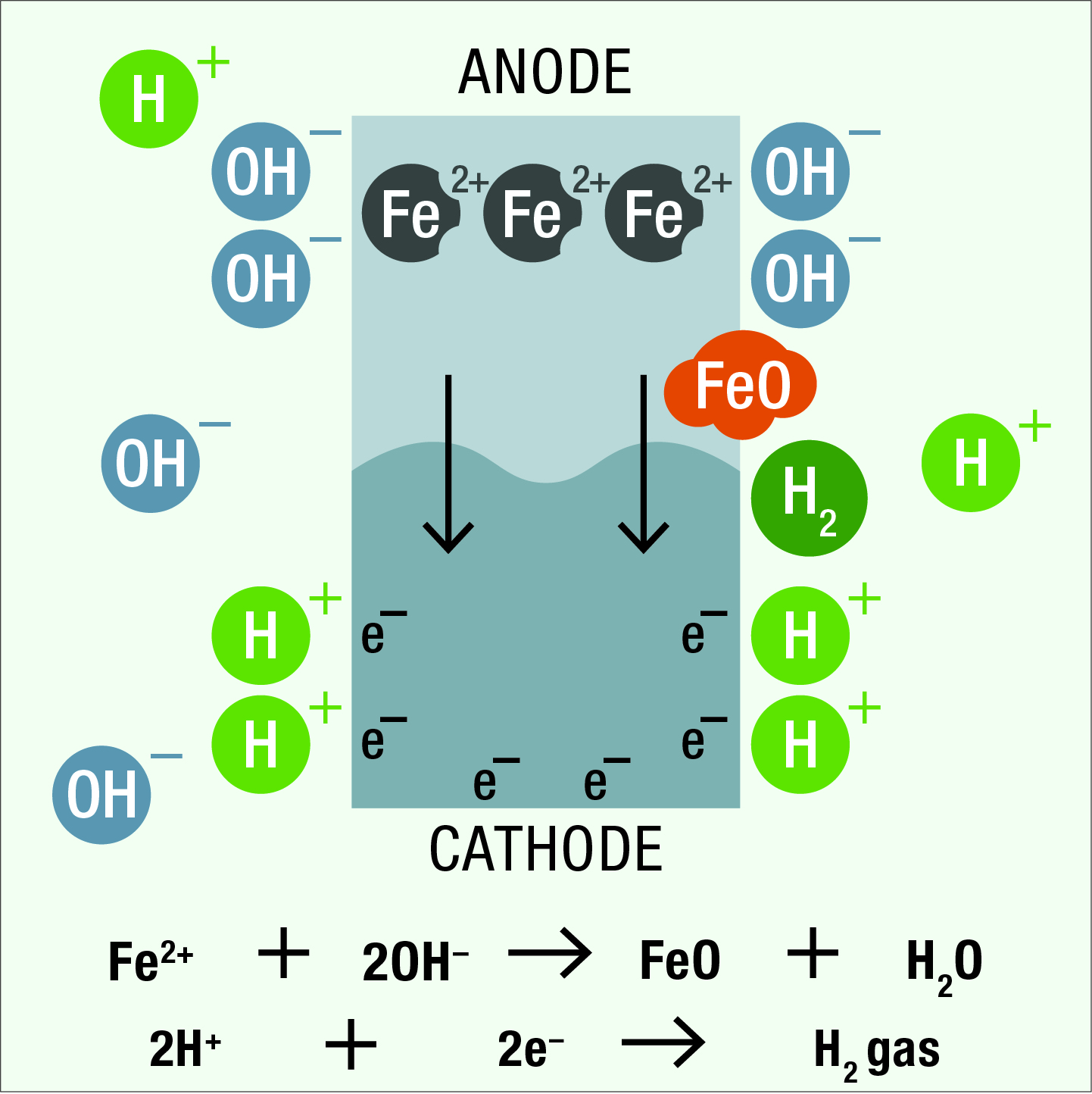 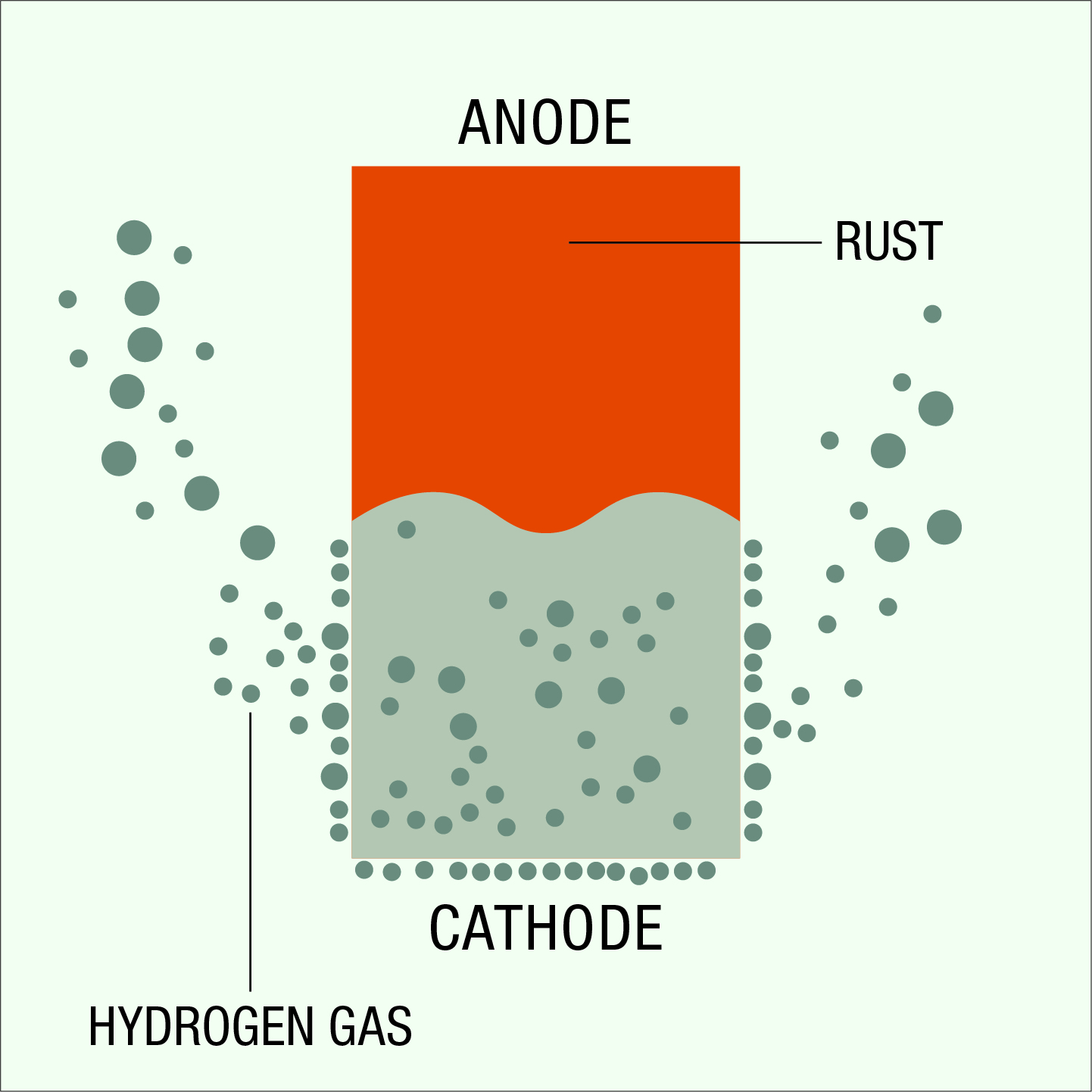 Under suitable conditions corrosion occurs at the rate of billions of complete reactions every second and soon results in a layer of rust appearing over the surface of the anodic area. 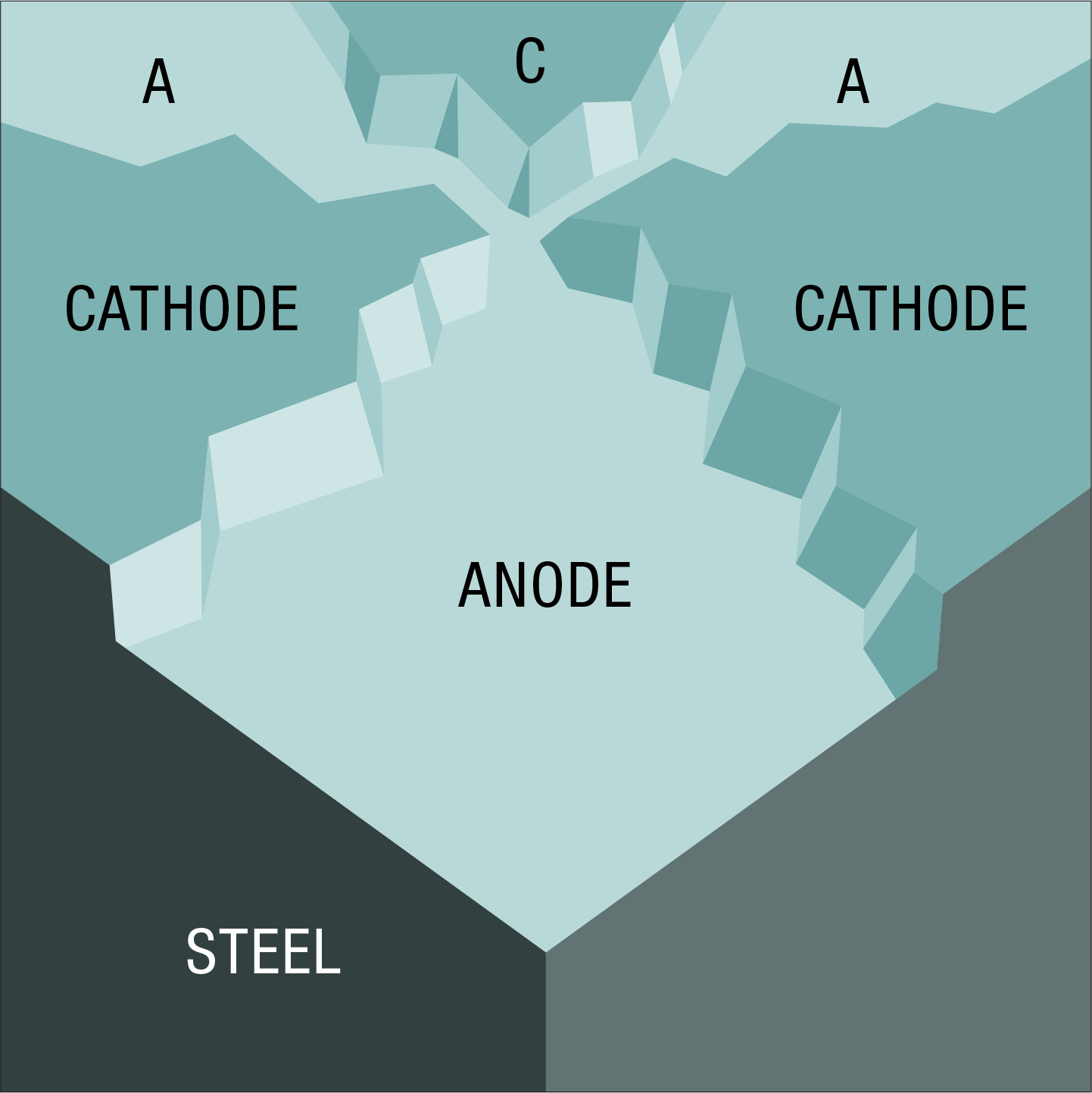 The anodic and cathodic areas on a piece of steel are microscopic in size. When greatly magnified, the surface might appear as the mosaic of anodes and cathodes visualised here, all electrically connected by the underlying steel. Corrosion occurs in the anodic areas. 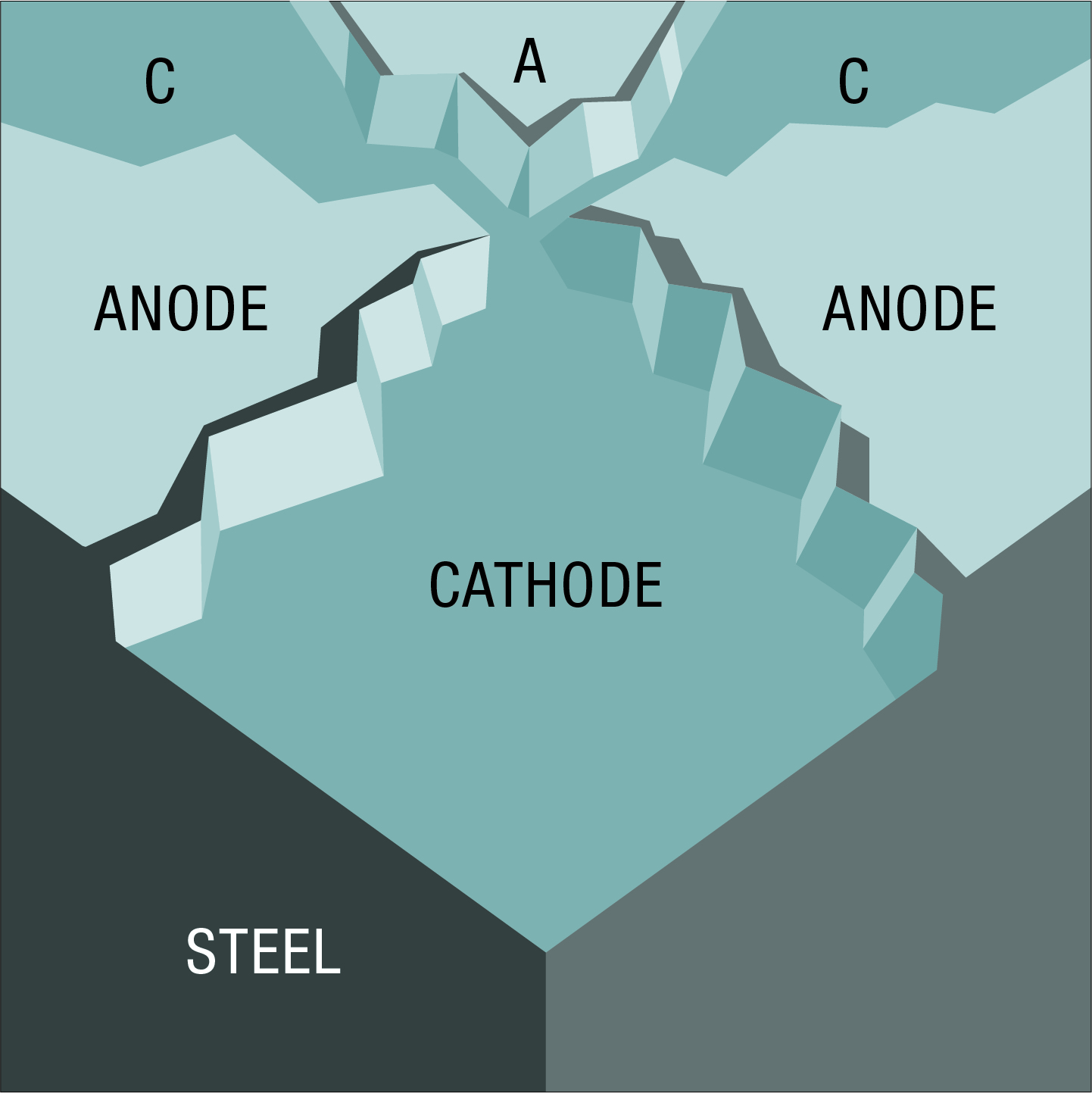 As anodic areas corrode new material of different composition and structure is exposed. This results in changes in electrical potentials, causing anodes and cathodes to exchange roles, though not all at once, and areas previously not corroded are now attacked. These processes may continue until the steel is entirely consumed.

The problem with conventional barrier protection, such as painting, is that it will not prevent corrosion if the base steel is exposed due to mechanical impact damage or abrasion of the coating. In fact, some barrier protection paints allow corrosion to proceed undetected in the form of under-film corrosion. In the event of severe mechanical damage and exposure of the base steel to the environment, galvanizing also provides cathodic protection. The galvanizing performs in a similar way to other sacrificial protection systems, except in this case the sacrificial anode is distributed over the article to be protected and electrical continuity is assured. The cathodic protection characteristics of galvanizing ensure that mechanical damage does not result in concealed under-film corrosion and potential catastrophic failure prevalent in some other protective coatings.

A protective patina is generally made up of insoluble zinc oxides, hydroxides, and carbonates, but can contain other basic zinc salts depending on the environment. Once the patina stabilises, it reduces the exposure of the galvanized coating to the environment, thus considerably slowing the corrosion process. This patina regenerates itself after damage by slowly consuming the zinc in the coating.

The zinc patina begins its development with exposure to oxygen in the atmosphere, forming a layer of zinc oxide on the surface. Moisture from rain or humid air reacts with the zinc oxide to form zinc hydroxide which then reacts with carbon dioxide present in the air to form the tightly adherent, insoluble zinc patina. 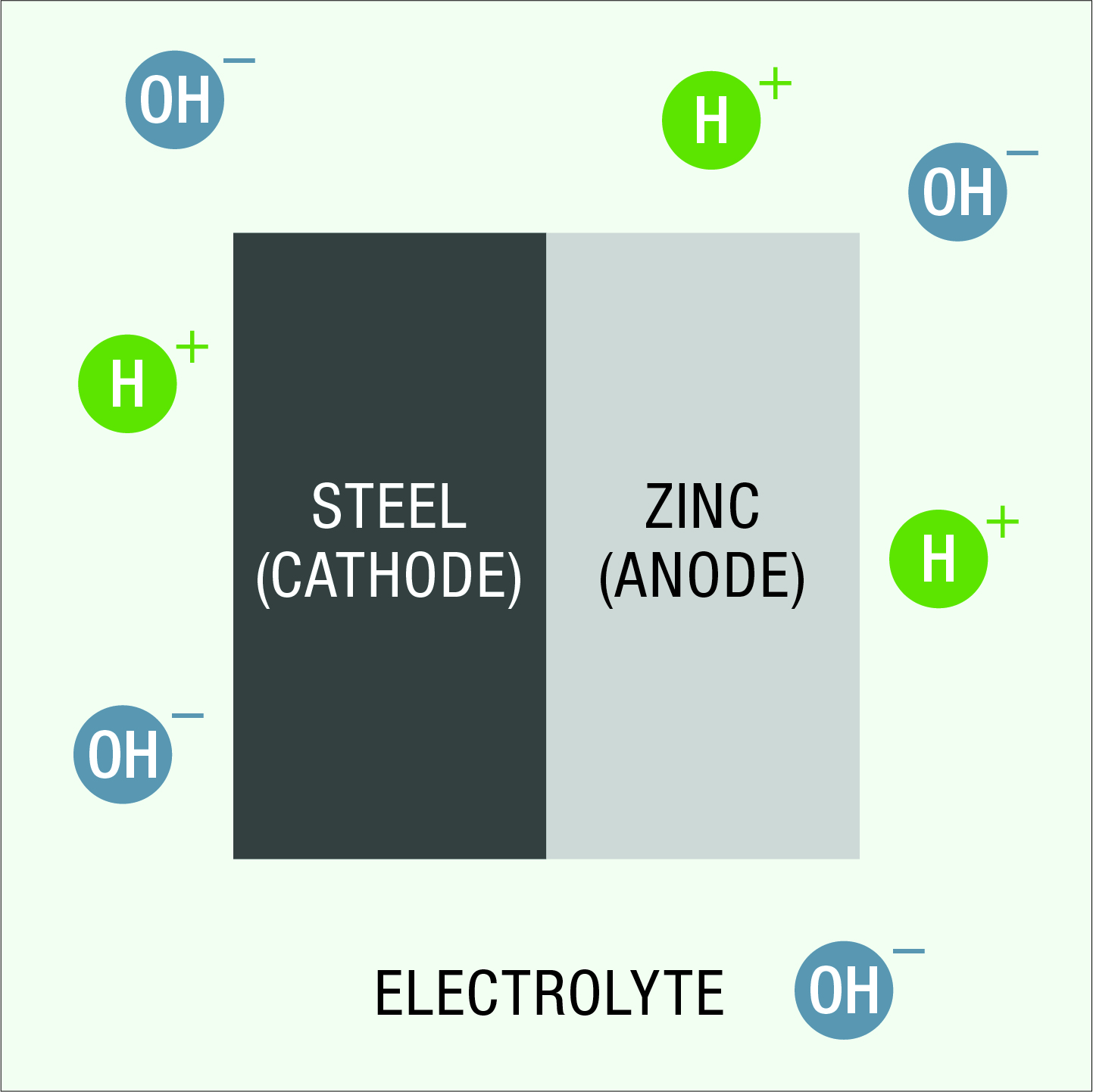 When zinc and steel are in contact in an electrolyte, differences in electrical potential develop and an electrolytic cell is formed. Zinc is more electrochemically active than steel (Figure 1). The zinc therefore becomes the anode for all the steel, preventing the formation of small anodic and cathodic areas on the steel surface. 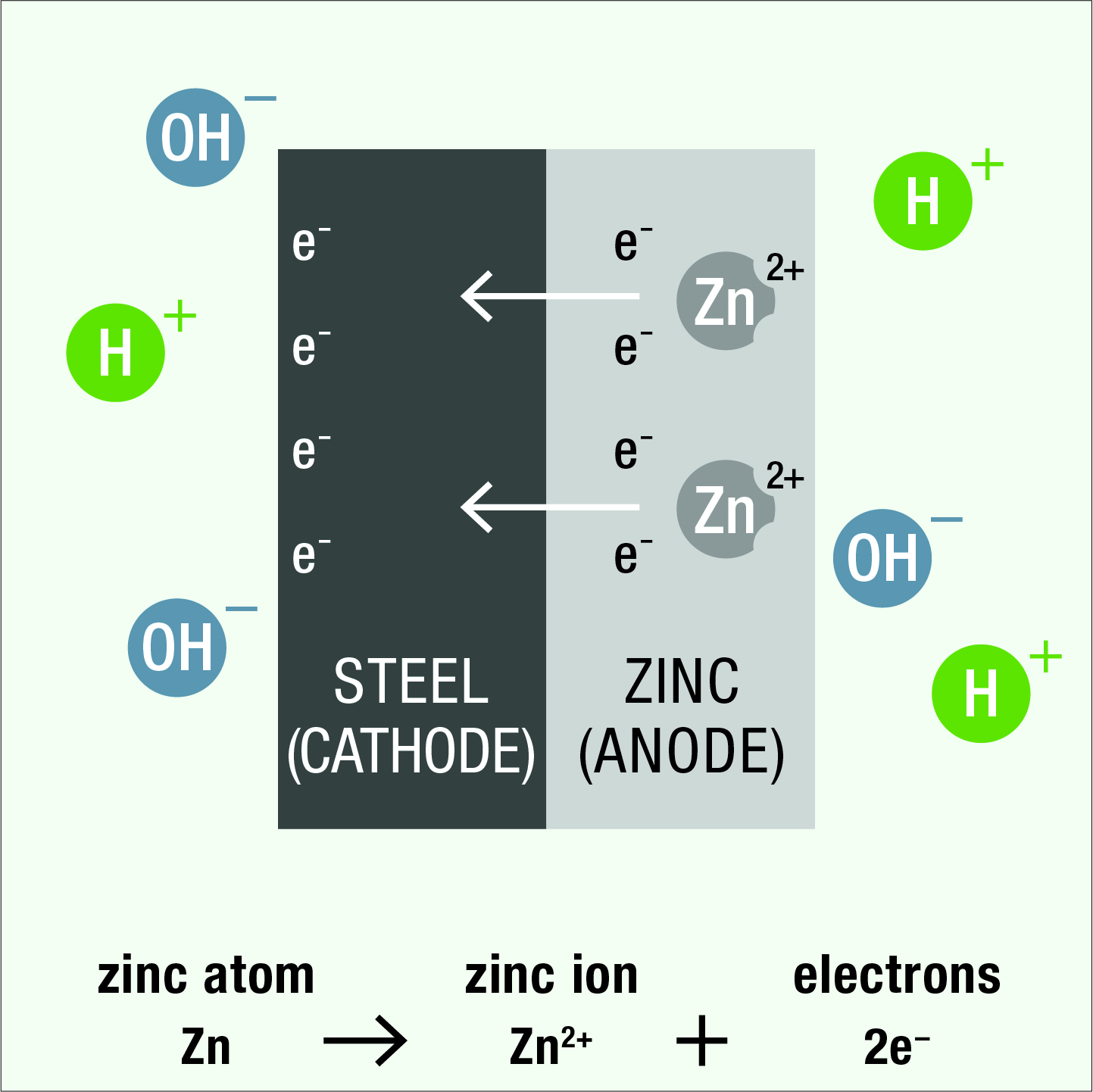 As a result of the differences in electrical potential within the cell, negatively charged electrons flow from the zinc anode to the steel cathode and zinc atoms in the anode are converted to positively charged zinc ions. 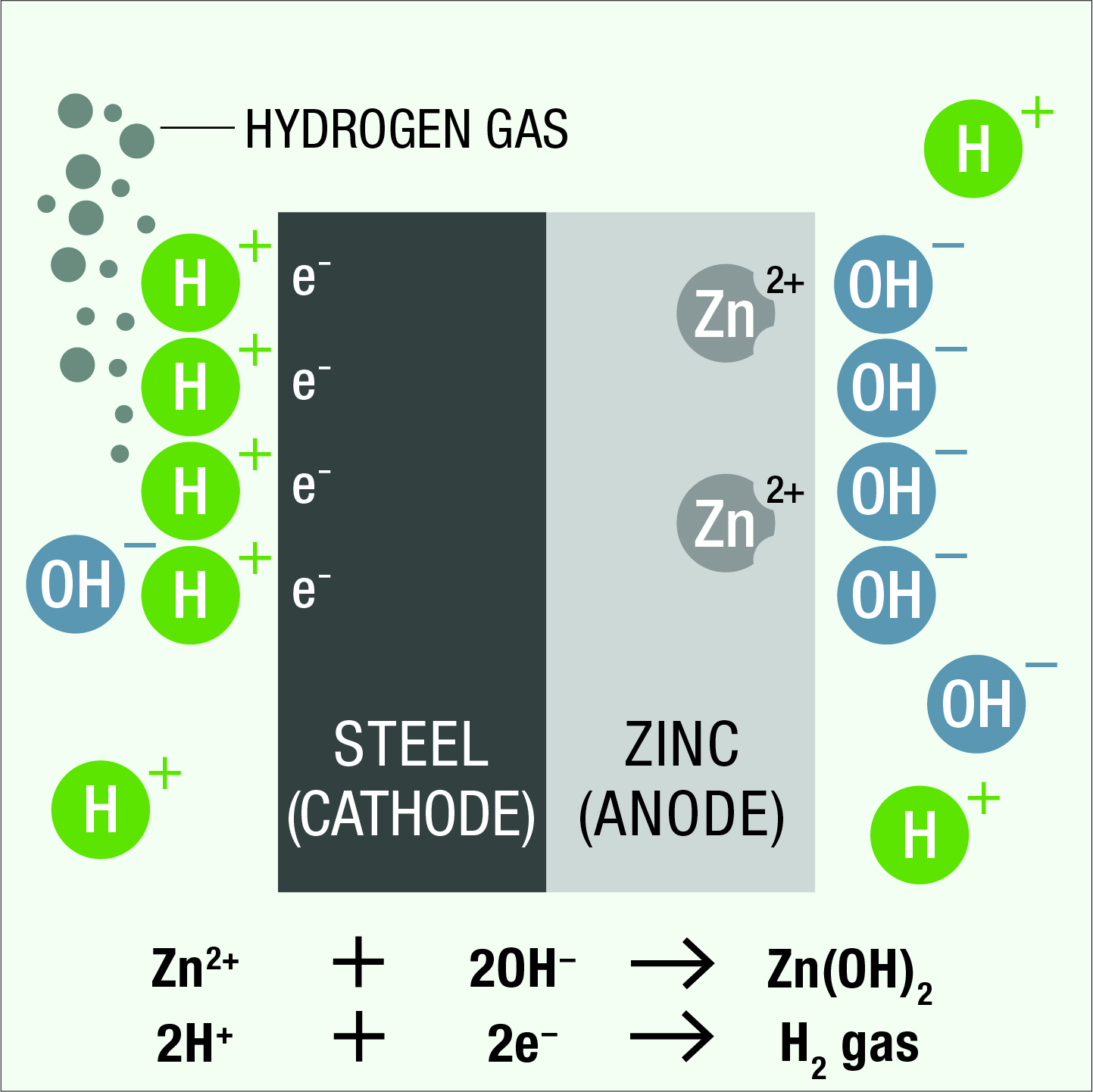 Galvanic series of metals in a sea water electrolyte

Figure 2 shows a series of metals arranged left to right in order of electrochemical activity in sea water. Metals on the left of the scale provide cathodic or sacrificial protection to the metals to the right. The scale indicates that magnesium, zinc, and aluminium protect steel. In most normal applications magnesium is highly reactive and is too rapidly consumed. Aluminium forms a resistant oxide coating and its effectiveness in providing cathodic protection is limited. 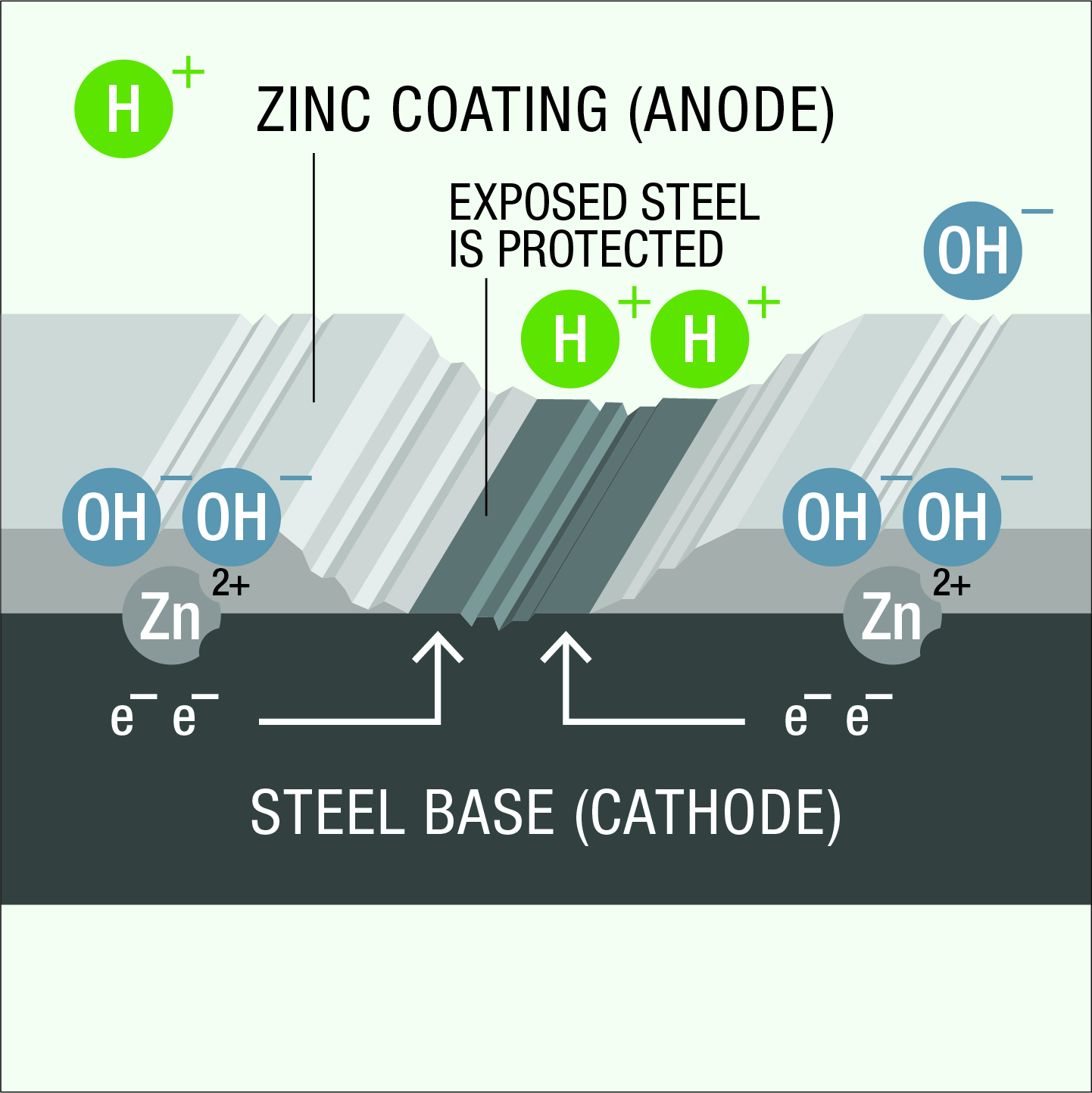 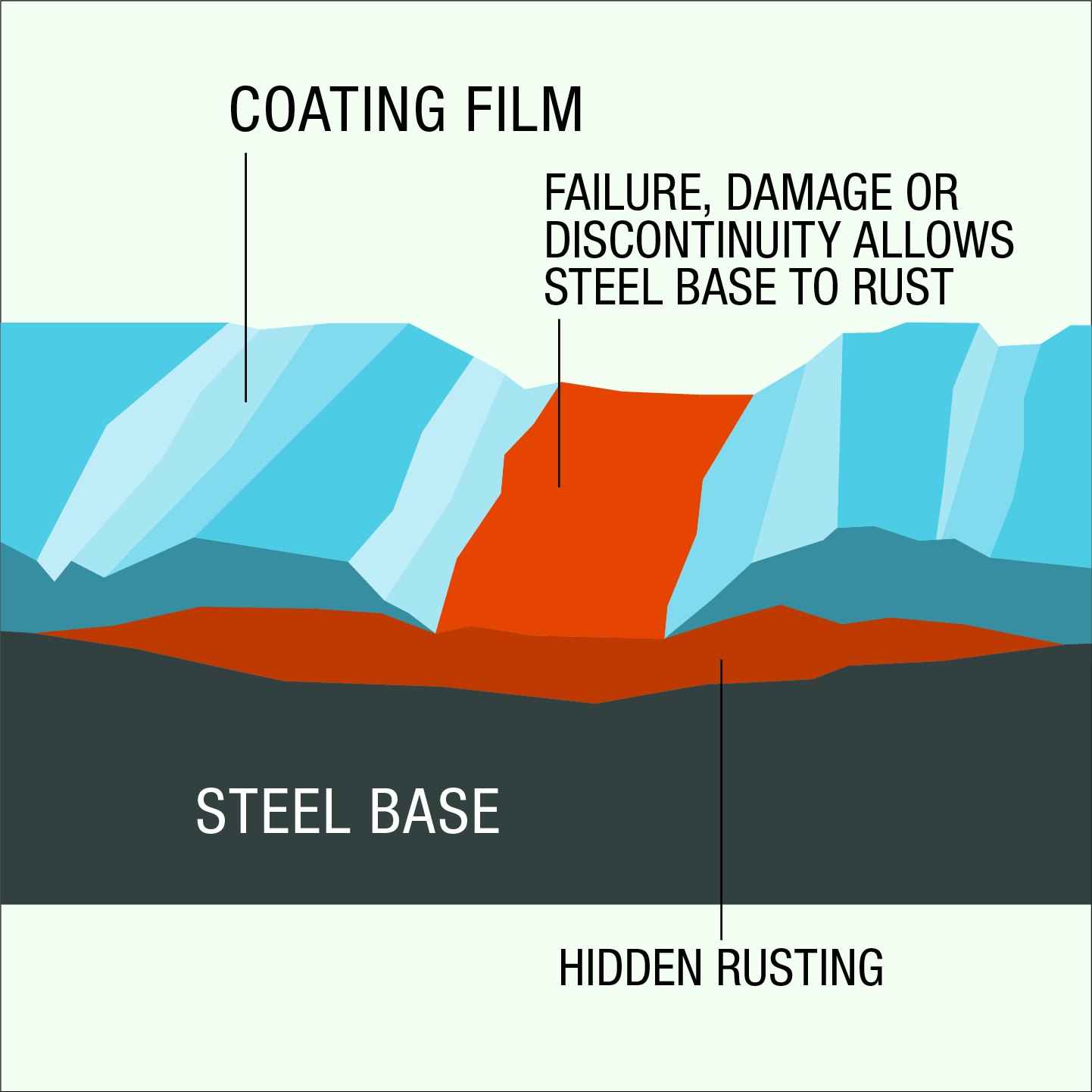 Where continuity of galvanized coating is broken by cut edges, drilled holes or surface damage, small areas of exposed steel are protected from corrosion cathodically by the surrounding coating. Touch up may not be necessary for areas less than 5mm in diameter due to the cathodic protection provided and this sacrificial protection can continue for many years. In service, zinc corrosion product tends to build up in the coating discontinuities, slowing the rate at which the surrounding coating is consumed to protect a damaged area. A practical example of this cathodic protection phenomenon is the uncoated internal threads of certain fasteners. The uncoated internal threads of galvanized nuts are protected from corrosion by the zinc coating on mating bolts and studs.

When substantial coating damage has occurred to a galvanized coating during handling, fabrication or erection, coating repairs are necessary. See AN 07 Field Repair of Welded Areas and Other Damage.