The construction requirements of structural steelwork involving fabrication, corrosion protection, erection, and modification of steelwork, including detailed provisions for bolted assemblies is covered in a single Standard.

There are four types of structural bolts referenced in Standards and used in Australia. Several of these have been the subject of major revisions in recent years, including AS/NZS 1252, which now incorporates elements of the EN14399 series allowing for strength grade 8.8HR and strength grade 10.9HR assemblies, along with more traditional commercial and high strength grades.

Specialised fasteners such as stud, footing, and anchor bolts are also covered in some of the design Standards. The properties of these fasteners are often as per the common strength grades. The GAA can provide further information as required.

Where not referenced in this document, full details of the Standards listed here can be obtained from
www.standards.org.au.

A major revision to AS/NZS 1252 in 2016 facilitated improved compliance outcomes for high strength bolts. Other changes to that Standard aimed to move towards a bolt specification that was aligned with global supply. AS/NZS 1252 now consists of two parts (technical requirements and verification testing). Part 1 includes the following major changes to the technical requirements:

AS/NZS 1214, Hot-dip galvanized coatings on threaded fasteners
(ISO metric coarse thread series) is the Standard used to specify hot dip galvanized coatings on structural fasteners. This Standard was modified in 2016 to align with the international Standards and to support the changes to AS/NZS 1252. It provides users with simpler specification and purchasing arrangements consistent with international norms. The new AS/NZS 1214 is essentially an adoption of ISO 10684. 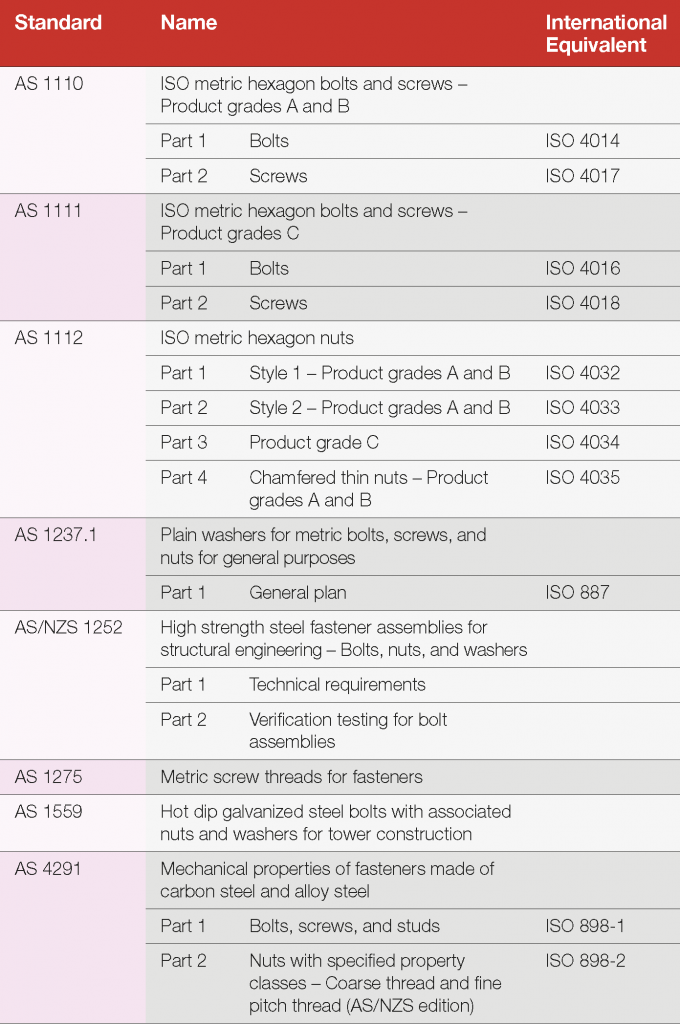